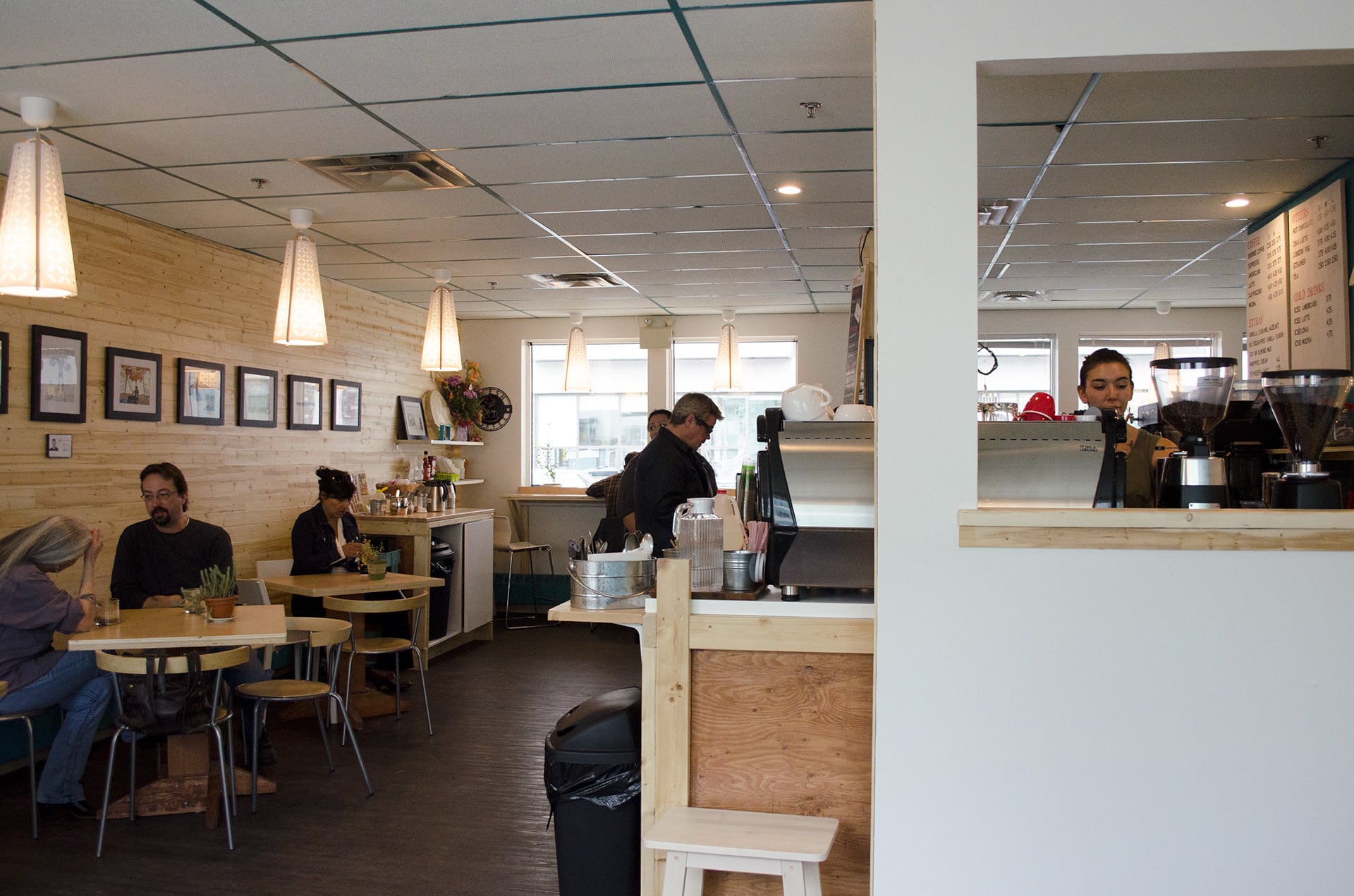 Getting caffeinated at Birchwood Coffee Kǫ̀

A new generation of ambitious eateries is raising the city’s culinary bar. But can Yellowknife really support this boom?

With the high-profile openings of an eclectic batch of restaurants in 2015/2016, from independents like the Birchwood Coffee Kǫ̀ to franchises like Fatburger, it feels like Yellowknife is in the middle of an unprecedented restaurant boom. And in some ways it is: numbers aside, many of the establishments opened over the last year have been ambitious upgrades to the Yellowknife status quo, in everything from menu selection to interior design and ambiance.

But don’t forget to pour out a flight of wine for Fuego, Sonny’s, KFC, Trek, Blue Star, the Diner, and Sarah’s Hot and Ready, among others. In the last year or so, Yellowknife has also lost a handful of restaurants — for a variety of reasons — and almost certainly some of the doors so freshly opened in 2015/2016 will shut sooner than later. An uncertain economic future, a transient labour pool, high overheads, the sheer logistical complications of trying to serve up decent-to-excellent cuisine in the sub-Arctic mean that boom or not, running an eatery up here is not for the faint of heart.

A changing market
Luke Wood, owner of the late, lamented Thornton’s Wine & Tapas (it closed in mid-June), says his fine-dining restaurant just wasn’t the right fit for such a small city in the long run.

“It’s kind of tricky. There’s only so many people in town, [so] you don’t have a large market to draw on and you’re doing a specific type of restaurant,” he says. A high-end place like his needed people to come in every night and spend around $50 on a bottle of wine to survive, says Wood.

His restaurant had a nine-year run, lengthy by local food industry standards, but the economy just wasn’t as it used to be come summer 2016, Wood says. “Not too long ago, with the mines and people rolling in [with extra income], there were a lot of people willing to spend that type of money,” he says. “But lately it hasn’t been like that.” In a post-Snap Lake environment, the high-end sector has contracted.

In order to get by, Wood says he created specials on nights that were slow, like “Wine-down Wednesdays,” which were generally successful. But it just wasn’t enough in the end. “If you’re in a city of a million people, it’s a lot easier to get 50 or 60 people to come out for a night,” he says. “But if you’re in a town of 20,000, there’s just not enough people going out every night.”

Besides a lack of fresh customers, and high overhead, constant staff changes can easily wear down a business. Wood says that Yellowknife’s transient labour pool was another major challenge he faced, especially when dealing with less lucrative shifts. “Even though [servers are] making good money per hour, they’re not making good money per day… it’s more of a really good part-time job, not a full-time position,” he says.

Long-running cafe/meeting place Javaroma finds itself in a much more competitive market these days, with the recent openings of two new downtown spots with a coffee focus, The Fat Fox and Birchwood Coffee Ko. At the same time, Rami Kassem and Fadil Memedi, the partners behind Javaroma, have embarked on their own expansion: they opened an outlet at the airport in late 2015, and earlier this year began operating the Legislative Assembly cafe — where they have also taken over the catering contract.

Kassem claims that trying out new things and engaging with customers is a key part of his operation’s longevity. “In the service industry, you have to concentrate on service, food service, quality and the market… You have to be creative and that leads to loyal customers,” he says. “That’s one of the main pulls of your business and any other business.”

“You can stay where you are and accept what you have,” he says. “But if you don’t have future plans or targets, you stay the same, and then maybe you’ll be hit very hard by the service quality, because it’s [very challenging] here.”

“If we as business owners wait [until] the sales flat-line, then I think we already waited too long… You have to have projections and think of the future of your business and how you want to see it.”
Javaroma has been steadily implementing new features over the years, says Kassem, such as customer-loyalty rewards programs, initiatives that give back to those in uniform, and behind-the-counter tweaks. The sandwiches and baked goods might not seem to have changed much, but look at those Logan’s Run-style disks that flash and beep when your order is ready.!

“The more you put in new technology or products, the more easier you make it for your customers,” Kassem says, adding that he and Memedi often travel to trade shows to observe what new things they can bring to keep Javaroma customers coming back.

As for the recent openings of Birchwood and The Fat Fox, Kassem says he doesn’t worry much about competition. “We don’t look at what competitors do; all the time we look at what we could do more.” (This hasn’t always been his argument in the past when facing competition from food trucks.)

It’s always going to be challenging, Kassem acknowledges. “It’s very very expensive to run a business [in Yellowknife],” he says.

More than food and drink
Like Kassem, Jason Perrino, co-owner of Twist, says that keeping customers loyal to your establishment is what allows Yellowknife restaurants to see another day.

“I think you have to do more than just your food and alcohol,” Perrino says. “You schmooze, you network, you smile, you put on shows, events… things that are different [and] you listen to customers — if they suggest something, you go ahead and you do it.”

Another survival technique Perrino suggests is finding a niche market that “hasn’t been serviced to.” If you’re going to open up another food service enterprise in Yellowknife right now, it’ll need to be something special or different.

Yet, in the end it’s about providing the best experience you can. Perrino recalls a time when one of Twist’s waitress ordered the same lunch as a customer, but gave her meal away rather than make them wait for the second order.

“It’s those little things that make people feel good, to let them know you’re important to us and our success depends on you.”

Ask realtor, city councillor and former owner of Javaroma, Adrian Bell about the current situation and while he agrees that the “proliferation of restaurants has been stunning,” he says that the food service industry in general has a high rate of turnover — it’s a natural thing that happens everywhere, not just in Yellowknife. “I don’t think [competition is] extra high here.”

And there are some ways in which Yellowknife restaurateurs actually benefit over southern operators, he says. You can quickly gain industry experience that would take years to accrue elsewhere, he says. Another plus: from Bell’s real estate perspective, despite a chorus of complaints over rental and lease costs: “Rental rates are more competitive here… because we have a glut of retail space. A lot of the space in the lower end is becoming really cheap… So you can get into somebody’s space for not a whole lot of money.”

Ultimately, says Bell, “we’ve got a better selection of restaurants per capita than any other city in Canada with 20,000 residents.” And that is undeniably so. Few similarly sized Canadian communities can boast the sheer range of culinary options we have. For now, anyway.