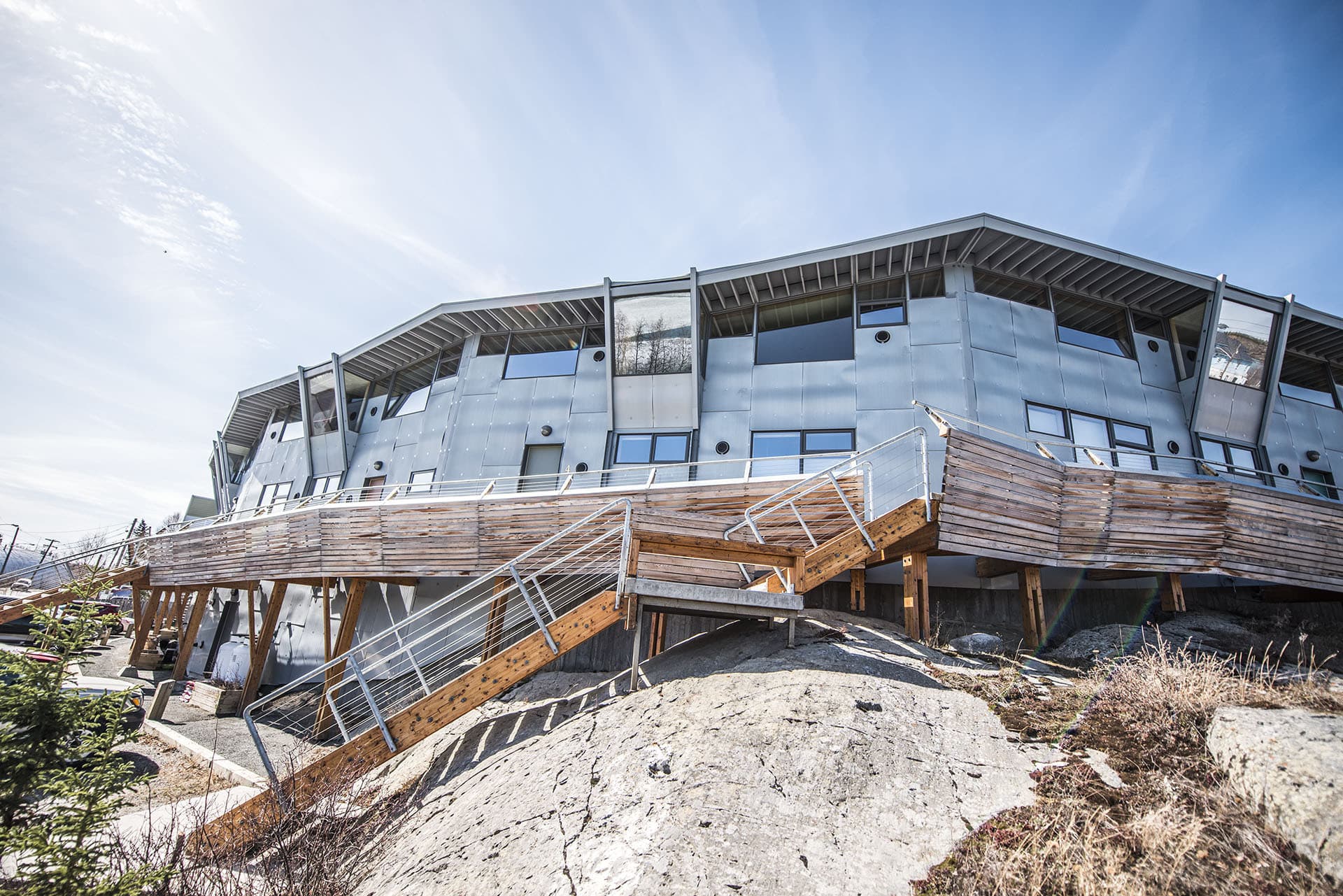 Yellowknife’s most famous neighbourhood is actually a collection of many wildly varied areas, from the DIY shacks of the Woodyard to Latham Island super-mansions

These Gino Pin-designed condos, built in 2005, retain traces of Old Town’s DNA while being symbolic of the area’s gentrification

Boomtown, slum, Haight-Ashbury with a Northern twist — Yellowknife’s oldest part of town has been all of these things over the decades. Today the area, which stretches from the bottom of the Franklin Ave. hill out along the rocky peninsula sticking into Great Slave, is the quirky, creative heart of YK, though also one of the city’s most upscale and desirable neighbourhoods. In fact, to call it a single neighbourhood is a misnomer. You have the winding dirt lanes of Willow and Peace River Flats, the off-the-grid, DIY oasis of the Woodyard, the waterfront mansions of doctors and lawyers on Latham Island, and even (if you want to stretch the definition) the colourful houseboat community bobbing just off shore along Jolliffe Island.

Architecture-wise, there’s not all that much holding the diverse neighbourhood together, other than a propensity for innovative builds and a tendency towards a homey clutter, kind of like a well-used kitchen. Likewise with the neighbourhood’s residents: young hipsters and aging hippies live cheek-to-jowl with business people and wealthy professionals. What really ties it all together is what it’s not: New Town, with its planned grid, functional sewer system and this-could-be-anywhere stubby highrises. Old Town grew organically over many decades, and, while increasingly gentrified, it still wears its heritage on its sleeve, thumbs its nose at order and attracts folks keen to contribute to the eccentricity, or at least marinate in its aura of cool.

The area’s human history began long before the Yellowknife gold rush of the mid 1930s, with the peninsula being used by Dene hunters and the hunk of rock now called Pilot’s Monument a prime lookout point from which to survey the bay. The first major population boom came in 1935 following the discovery of gold along the shores of Yellowknife Bay. The sheltered peninsula was used as a staging ground for floatplanes and barges, and while most of the population lived in mining camps several kilometres away, what’s now Old Town became the region’s business hub, with makeshift tents quickly turning into permanent hotels, stores and cabins.

In the 1950s, with the development of an ordered and “respectable” New Town just up the hill, Old Town — now finally deserving its name — started to decline. Some houses were hauled up the hill, others were abandoned. By the 1960s, City Council was contemplating bulldozing the residential properties, many of them shacks, and rezoning the whole area as industrial. The neighbourhood’s oldtimers — prospectors, miners, bushmen — weren’t pleased with the prospect, and soon found allies in a new breed of Old Towners that began to arrive in the 1970s:  young hippies drawn to the ratty Shangri-La of unordered shacks and off-the-grid living. The new arrivals brought an artsy flair to the community and tenacity to the opposition to City Hall, which resulted in several storied kerfuffles over land-use planning in the 1980s and ‘90s.

Ultimately, over the past 20 years, the neighbourhood has become increasingly bourgeois, with shacks replaced by houses, prospectors replaced by government workers. That said, it still has the by far the highest concentration of heritage buildings in Yellowknife, and it’s the only place you can bump along a dusty street with a name like Ragged Ass Road or Lois Lane.

On the edge of downtown, it only takes a few minutes to drive to Old Town, and you can walk there in less than 15 minutes. Of course if you’re booking it out to Latham Island on foot it’s going to take you significantly longer. But overall, it’s one of Yellowknife’s more accessible neighbourhoods. There’s a bus route running down Franklin into Old Town, and some new bike lanes through the busier stretch of Franklin by the Brewpub are in the planning stage.

The neighbourhood is zoned for commercial and residential, so there’s a reasonable number of stores, businesses and eateries. It’s not quite the commercial hub of yore, but you can still get your groceries, essentials and outdoor gear from Weaver and Devore, which has operated in the same are of Old Town since 1936. For dining, you have the famous fish-joint Bullock’s, the recently opened Woodyard brewpub — YK’s newest place to see and be seen — the brunch favourite Dancing Moose Cafe, and, in the summertime, the iconic Wildcat Cafe with its sunny, west-facing patio. There are several art galleries in the neighbourhood — Down to Earth Gallery and Gallery of the Midnight Sun — and a few boutique shopping options like Just Furs, but for the most part, you’ll have to head up the hill for everything else.

Thanks to government dock, several boat launches and proximity to the lake, boating in the summer and skiing in the winter are Old Town’s recreational highlights. There are a number of parks in the neighbourhood, including Fritz Theil Ballpark, which hums with softball rec league in the summer, and Pilot’s Monument, with its zig-zagging staircase and best view in town. Next to the ballpark there’s the Racquet Club, which hosts YK’s squash and racquetball courts as well as an active gym.

There are technically no schools in the neighbourhood, though both high schools are nearby, at the top of the Franklin Ave. hill, as is Mildred Hall elementary school, on the far side of downtown, a five or ten minute drive away. Likewise, K’alemi Dene School, which primarily serves Yellowknives Dene students, is further out the peninsula in Ndilo.*

*Correction: The original article did not mention K’alemi Dene School.