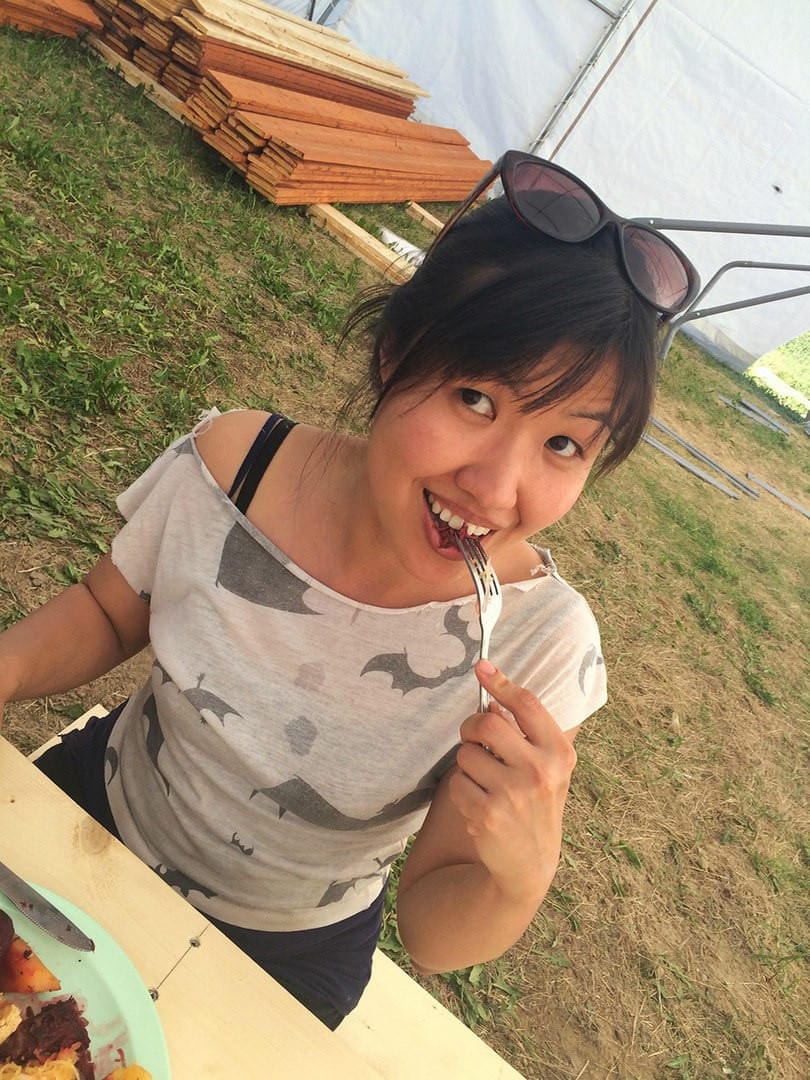 About a month after moving to Yellowknife four years ago, I had lunch with two people I’d just met who were also relatively recent transplants to the city. We gathered at the sadly no-longer-existent Smokehouse Café for its lunch buffet. They piled their plates with bison and smoked char, while my plate filled with the pasta special of the day, rice, veggies and salads. There was a chuckle when they realized I was vegetarian. I was told that Yellowknife is the place where vegetarianism dies. Meat creep starts with the fish, I was told, and then the occasional bite of wild meat that you won’t be able to refuse – unless you want to be rude to your host, who literally killed for your meal. Before you know it, it’s full-out wings night every Wednesday. “It’s very common. I know at least three well-intentioned, long-term vegetarians that have converted since moving here. Don’t bother fighting it,” I was advised, in a way that can only be relayed by a smug meat eater to a self-righteous vegetarian.

Prior to moving to Yellowknife I had not had red meat for about 16 years, poultry for about eight, and fish for about four. I had stopped eating the larger animals first, with the common, if not entirely correct, logic that size somehow correlated to sentience. For me, choosing not to eat meat stemmed from moral reasons, but also environmental reasons. Our society’s model of factory farming has been widely documented to be cruel – for both the animals and those who work with them – and a large contributing factor to worldwide environmental degradation and climate change. However, thinking back to that lunch at the Smokehouse now, it’s not hard to argue which meal was more ecologically sound – the somewhat local bison and char, or the vegetables and grains grown in unknown locations and conditions and then trucked up north.

I moved to Yellowknife from Toronto. It was super easy being a vegetarian there. Trendy even. Friends who could never imagine giving up meat would indulge in the occasional meatless Monday and not put up a fight when you suggested dining at a vegetarian place. Raw-food bars, vegetarian comfort-food diners, vegan-poutine joints, you name it. Toronto is an extremely accommodating city for its vegetarians and vegans. Yellowknife, not so much.

Vegetarian options at Yellowknife restaurants are an afterthought (I moved here pre-Zehabesha, the popular Ethiopian restaurant and now standard go-to option for a nourishing vegetarian meal) and my dietary choices were much harder to socially integrate. Vegetarians are a much smaller subgroup and we’re living on land that has been traditionally dependent largely on animals for sustenance. Moose and caribou are revered here.

So while I did not kill for my food, something did have to die

Eating fish started almost immediately. A welcome-to-Yellowknife meal at Bullocks was supposed to be an exception, but the accessibility of some of the best fish in the world was hard to resist. The fish here is fresh, affordable and comes from waters that are not overfished. I had my first taste of wild meat almost two years ago in Hay River. I was taking a course at the Northern Farm Training Institute (NFTI) along with students from all over the territory. NFTI teaches sustainable and practical agricultural skills adapted to northern climates, with aims of promoting food security in our northern communities. The food served at the courses was always very good and included locally grown, foraged or hunted ingredients. The students were told we could bring wild meat to share, should we want to do so. In that particular course, a moose roast was contributed and slowly simmered for hours in a red wine sauce by our chef. I took a bite, and it was delicious. Despite not having had red meat for 18 years at that point, it did not taste unfamiliar or feel weird. My digestive system did not revolt.

I was happy to have participated socially in that meal and pleased at my bravery in having tried the moose. I continued on with my pescatarian diet and didn’t make an active choice to eat meat again until last year. What finally wore me down was a combination of bouts of anemia that supplements weren’t able to remedy, a reexamination of why I chose not to eat meat and a better understanding of the ecology of a sustainable food system. Right now, I’m at the occasional-bite-of-wild- (or sustainable) meat phase of deprogramming my vegetarianism.

The irony is not lost on me that it took learning how to grow my own vegetables to change my views on eating meat. We are so far removed from our food systems and the natural world that most of us don’t know what’s involved in growing food. Our exposure to procuring food is largely limited to perfectly graded items on store shelves. But when you grow your own food, you quickly learn that life does not exist without death.

I wanted to grow in sustainable ways, according to natural ecology. This meant avoiding chemical fertilizers, pesticides and fossil fuels. Which also meant that my soil was nourished with bone and blood meal, manure and compost. Bone and blood. So while I did not kill for my food, something did have to die. At the risk of sounding cliché, it’s the circle of life.

None of my arguments for being a vegetarian made sense here. Morally, I do not have an issue with wild meat if it is hunted in a sustainable and respectful way. In a balanced ecology, there is an important role for the predator and prey. A sustainable environment requires both. Ecologically, is a vegetarian-based diet sustainable? Not within our current model of industrial agriculture. This model requires continuous high inputs of fossil fuels, synthetic chemical fertilizers, pesticides and herbicides. All of this, combined with heavy tillage and irrigation, is degrading topsoil, a vital part of life on earth. While no animals were killed directly for my brown rice, the decline of biodiversity and wildlife for agricultural land meant blood was still on my plate. My intentions for a more sustainable world through a vegetarian diet were well meaning, but misguided.

Can the world eat less meat? Definitely. Should we eliminate meat altogether? Yes and no.

Strong arguments can be made that our model of livestock production is not sustainable. It’s so far removed from farming that it’s no longer even called farming. They’re now called animal feeding operations (AFO) or concentrated animal feeding operations (CAFO). Livestock is kept in confined spaces and fed a diet of mostly soy and corn, a diet not natural to the digestive systems of these animals. The soy and corn are grown in conditions that are unsustainable for the reasons already mentioned above. If this is the model of meat production that we’re working with, then yes, eliminate. But the world still needs to be fed. All 7.4 billion of us.

So how do we feed a world? I’m not sure. Wild harvest and wild meat is good, but it certainly can’t sustain our population. The model that reconciles the most with me morally and environmentally is one that is local, small scale and regenerative. I use the word regenerative rather than organic as a regenerative farming system uses a system of proper and respectful livestock management as an input for growing food. In turn, the output of food will also play a role in feeding animals. We’re back to the circle of life again. Funny how nature has it right, isn’t it?

All these years I was fighting against eating meat, but what I really should have been fighting against was a broken agricultural and food system. I now eat fish and I have made a choice to occasionally eat wild or sustainable meat, but have continued to opt of out of  Wednesday wings night – not quite fulfilling the predictable pattern of a doomed vegetarian in Yellowknife. I have chosen to subscribe to the wisdom of food activist Michael Pollan, “Eat Food. Not too much. Mostly plants.”